World Teacher’s Day was proclaimed on October 5th 1994 by UNESCO to celebrate teachers around the world. A month later in the same year, on the anniversary of PGRI (Republic of Indonesia’s Teachers Union), a presidential decree was issued to commemorate the day as National Teacher’s Day.

Below are some quotes in appreciation of teachers who have shaped our minds and lives.

“Those who know, do. Those that understand, teach.” ― Aristotle

“A good teacher is like candle – it consumes itself to light the way for others.” ― Mustafa Kemal Atatürk

“One child, one teacher, one book, one pen can change the world.” ― Malala Yousafzai

“Teach the children so it will not be necessary to teach the adults.” ― Abraham Lincoln

“Share your knowledge. It is a way to achieve immortality.” ― Dalai Lama XIV

Our gratitude to the heroes without medal. Happy National Teacher’s Day! 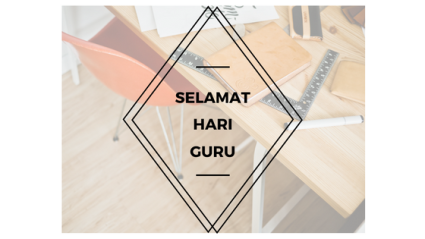 “Perut kenyang, hati senang” (When stomach is full, so is heart). We often hear the expression, and sometimes experience it ourselves. For instance, when we were in the office and it was lunch time, our stomachs growled because it was hungry. And then, by 3 p.m. we started to look for snacks. If we, as adults, are very careful of what we eat, what about our children?

The theme raised on the 7th day of Sahabat Anak’s Day Campaign Road Show was “Gizi Untuk Prestasi” (Nutrition for Achievement). The road show on that day was held in Gambir, and the team socialized the information about healthy food. The slogan was 4B: Bergizi, Berimbang, Beragam and Bersih (Nutritious, Balanced, Various, and Hygienic). The slogan was recited with moves and songs to help the children get interested and remember easily.

The game played in the road show was a giant Ular Tangga (Snakes and Ladders), with a giant dice. The children were divided into groups and each group had their own representative as a pawn. They were challenged with questions and then they had to sing the 4B song, did squat-jumps together, named protein sources, gave examples of healthy snacks and so on. Through the game, the kids became more enthusiastic and it was easier for them to absorb the information. There were 60 kids from Gambir and Pejambon participated in this event.

In the parental session, the event was equally hype. We realize that a mother’s role in a family is essential because they control the family’s meal and instruct the children to avoid unhealthy food. Food is served not only for pleasure, but we also need to consider the balance and sufficiency of its nutrition, such as carbohydrate, protein, fat, vitamin, and fiber. However, the menu should also have enough variety of food to prevent boredom.

Ibu Suratinah, one of the participating parents in Gambir, told her story. In their home, because the parents were often off to work hurriedly; they chose to give the children money to buy snacks or food from warung (small store). She was happy because during the session they were reminded that preparing and cooking their own meal was also quick and inexpensive. Also, even though they give money to their children to buy food, as parents they need to educate the children to buy healthy snacks.

At the end of the event, all the participants and volunteers were given packed of healthy meal: cooked rice, tofu nugget, cooked vegetable, and a banana.

We would like to thank PT. Kalbe Nutritionals (Fitbar) for the support. Thanks to Miranti and friends for the lunchboxes and drinks for the children. Also, we would like to thank all the sponsors and donors, and chaperone volunteers who were always in their full spirit to conduct the event.

This week, the children are in their preparation for Ujian Nasional (National Examination). Let’s pray for them so they can give their best, continue to the next level, and reach their dreams. Let’s continue to support the fulfillment of their rights to nutritious and healthy food; for a better generation; for a better Indonesia!

The story of a slice of pudding

“What is this called, Kak?”

“It is called pudding, silky pudding. Try it!”

The above conversation happened at the end of a roadshow session in Sahabat Anak Cijantung after they received their goodie bags and walked to an empty land to take a picture together. On Sunday (May 22nd 2016) we held the 7th roadshow for Sahabat Anak’s Day 2016 Campaign with the theme“Gizi Untuk Prestasi” (Nutrition for Achievement). This time there were 80 children, 56 parents, and 30 volunteers participated in 2 kinds of activities in different spots at Sahabat Anak Cijantung.

During the parents’ session, Dhilla led the activities with excitement so the participants were also enthusiastic by speaking up their opinions. After Ezria and Ayu presented the 4B (Bergizi, Berimbang, Beragam, Bersih) material, all participants were divided into small groups to share their own daily menu in their family. Generally, the parents already know the importance of providing healthy food to their children, however, the issues are snacking habit and being picky with food. When the cooking demo started, the parents got excited and they started to chit-chat with Andra, the chef, so the atmosphere of the evening was fun.

On the other session, Sammy led the children with his energic and cheerful style. “Healthy food consists of rice, vegetables… oncom, orak-arik tempe…” said one of the participants. When Imelda and Dian asked the participants about their future, it seems clear that they have a dream. Therefore, eating healthy food is very important.

The interesting thing is there were a few volunteers who got involved for the first time in the roadshow, which are Miranti and her team, who not only serve as the benefactors but also as chaperonesthat evening. Here is what Miranti had to say:

We are good friends and we used to worktogether in the same company, but now we work separately. Why we want to join this campaign? Initially, we wanted to hold an event at a shelter.We made a list of shelters in Jakarta and looked up their profiles. We look for a shelter that has a clear program and well managed too. After we look up the profiles, we chose Sahabat Anak. At first we wanted to make our own program, but Sahabat Anak is already campaigning about “Gizi Untuk Prestasi” (Nutrition for Achievement). Because lacking of nutrition is one of many health issues we decided to support the campaign. When I talked to Aty (Sahabat Anak’s Public Relation) it turned out that our concept is exactly the same. We decided to support this campaign by supplying the lunchboxes and drinks, and then packing-in. We fundraised by asking our friends and our bosses who are interested in this matter, and also made a proposal, flier and spread the brochure.This is our first experience. When we spread the proposal, there were rejections, and complaints because there was very little narrative, due to our busy schedule, our proposal is very simple but in the end we were grateful that we got more than we needed.” she said.

That’s it. We feel happy if this activity could involve the society to fulfill Indonesian children’s rights,especially to havenutritious food. No matter how busy we are, there is always something we can do to help them. See you in the next  “Gizi Untuk Prestasi”roadshow at Sahabat Anak Gambir on Sunday (May 29th 2016) at 2 PM – 4 PM!!

We would like to say thank you especially to our supporter PT. Kalbe Nutritionals (Fitbar) for giving packagesof nutritious food and to Miranti and her friends for supplying the lunchboxes and drinks for Sahabat Anak Cijantung that evening.